The opening weekend of the Lake Winnebago Sturgeon Spearing Season got off to a slow start, when compared to 2010.  There were a record number or licenses sold, but spearers only managed to bring in 39 Juvenile Females, 126 Adult Females, and 118 Males, for a total of 283 Sturgeon on opening day.  This number is substantially down from last years opening day where 515 Sturgeon were speared. 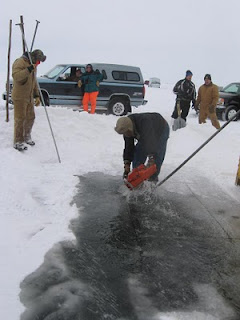 Despite the low numbers of fish taken, spearers were in high spirits and were welcomed with some above normal temperatures.  Water clarity lake-wide remains fair, but Sturgeon activity seems to be down.  Spearers on the north end of the lake are seeing lots of Shad and dying Shad in their spearing holes, but not much for Sturgeon.  There were only a handful of fish registered at Waverly Beach, despite hundreds of spearers in the area.  Stockbridge and just north of Stockbridge seems to be the most active location on the lake. 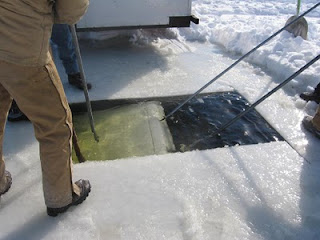 My cousin speared a 35lb. Sturgeon just off of St. Catherine's bay which is near Stockbridge this morning around 10am.   My cousin also talked to a friend that managed a 109lber. on opening morning at around 10:30 that came in 6 feet below the ice in 19fow!  He stopped by with the fish, what a beast!  The nose was touching one side of his truck bed and the tail was touching the other!  He said it was 68" long and if it would've had fully developed eggs it would've been pushing 140lbs!  I wish I would've taken a pic of that hog!


As for our group of 11 shacks, we zeroed on opening weekend!  We set up in 18fow a mile north of Quinney and a little over a mile out from shore.  The clarity was slightly dirtier than last year, but white PVC was still visible on the bottom as well as dead shad.  Shiner minnows kept my wife and I occupied, as they seemed to circle the hole all day long.  Besides the Shiners, we only saw a few dying Shad slowly swim through.


The season is still young, so get out there and put some time in for a chance at the fish of a lifetime!  If you would like to get an idea of how we cut our holes in the ice, check out this video!