Jiggin' The Dream With Kit's Tackle

Recently I have been given the opportunity to try out some jigs from Kit's Tackle, which is a small business located in Montana dedicated to creating the highest quality jigs on the market today.  Each jig is hand painted with extraordinary attention to detail!  A high quality paint job is teamed with some of the sharpest hooks on the market (2X strong super needle point Owner hooks) making for an exceptional product that will impress even the most experienced jig fisherman. 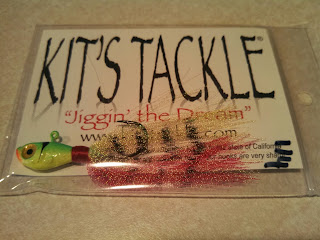 Kit's Tackle specializes in hair jigs, making a magnitude of color schemes in sizes from 1/32 oz to as large as 1-1/2 oz!  In the water, these jigs mimic a fleeing bait-fish in current, and can also be used in calm waters along the bottom, especially through the ice. 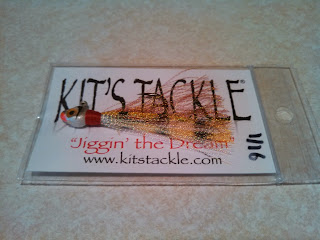 Kit's Tackle also makes standard round head jigs, which are available in 1/8 oz to 1/2 oz sizes.  These jigs offer a collar containing both a standard lip as well as a round lip that will hold your plastics and live bait on the collar of your jig fish after fish.  For me, this is a huge feature that is overlooked by many.  While tournament fishing, I have found that a jig that holds your bait in place will save you valuable time that is otherwise wasted repositioning your bait constantly throughout the tournament day. 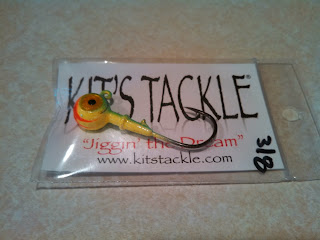 Kit's Stand Up Series offers anglers a stand up style jig, which excels during the hard-water months here in Northeast Wisconsin.  Whether fishing Gulp or Live Bait, these stand up jigs will present your jig to the fish in an enticing manner that will lead to more hookups.  These jigs are offered in sizes 1/8 oz to 1/2 oz as well. 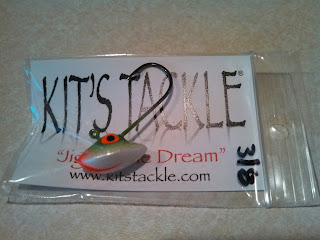 It is an understatement for me to say that I am excited to put these jigs to the test, as I have high expectations for Kit's Tackle Jigs to consistently catch fish here in Northeast Wisconsin.  Make sure to check back in the near future for updates on how these jigs produce for me!

If you are looking to purchase your own jigs from Kit's Tackle, check out their website at http://www.kitstackle.com and make sure to check out their entire selection of jigs, you will not be disappointed!
No comments:
Email ThisBlogThis!Share to TwitterShare to FacebookShare to Pinterest

November for many is a month spent chasing trophy bucks in rut whom are actively seeking out does.  While I do spent some time in the woods during gun hunting, I prefer to spend as much time as possible chasing both buck and hen Steelhead and Brown Trout throughout November.  There is just something special about spending a day on the water at this time of the year. The commotion of the annual King Salmon run has passed, there are still a few zombie Salmon lurking the rivers, but their appeal to anglers has long surpassed.  The Coho Salmon run has peaked, and is beginning to wind down as well.  There are only a few select anglers remaining on the water, while most sportsmen have traded in their fishing tackle for shotguns and bows!


November is a transitional month in the Lake Michigan tributaries, as the Salmon continue to die off, the rivers are flooded with new life.  Both Brown Trout and some Steelhead make their way back to their stocking/birthing locations each fall to spawn and complete the circle of life.  This annual migration creates a unique opportunity for those fishermen who choose to partake.


Brown Trout typically spawn between the months of October and December, but I have caught Brown Trout as late as March that were still spawning.  Steelhead are primarily spring spawners, but they are drawn to the tributaries and harbors in the fall for a different reason, food.  Steelhead absolutely love to eat fish eggs, and what better time and place to find lots of eggs than the tributaries in late fall after the Salmon spawn!


There are many different tactics that work at this time of the year to catch Trout in the tributaries, but with limited time on the water I tend to stick with the most consistent bait, fish eggs!  When choosing which eggs to use, I try to mimic what is naturally happening in the rivers.  Coho eggs and Brown Trout eggs are my favorite at this time of the year, but Steelhead eggs can also work well in the fall.


Trout are a little more selective on their locations in the rivers than the Salmon at this time of the year, so finding the fish can be a bit of a challenge.  I have found that Trout are similar to Walleyes, generally you will catch one right away if they are there, and if you catch one there is almost always more.  I have learned that covering water at this time of the year until fish are located is far more productive than simply picking a spot and setting up shop hoping the fish will come to you!

Trout are usually drawn into the rivers after a rain which increases the flow in the tributaries and feeds their natural urge to put their nose into current and go!  Understanding how the flow and water clarity affects the fish is paramount to your success at this time of the year.  Generally speaking, when the water is low and fairly clear the Trout will hang out in the lower sections of the river in deeper pools.  As the waters rise and the clarity lessens, these same trout will usually move upriver and trade in the deep pools for shallower, faster moving waters.

Trout fishing the Lake Michigan tributaries in November is a unique opportunity that presents a challenge with great rewards.  Understanding the key variables that influence these Trout at this time of the year will lead to more memorable days on the water and far less frustrating ones!  The next year you shoot your trophy buck early in the month, remember to give your fishing poles one last workout, you won't be disappointed!