Last August, Korey Sprengel and Derek Navis made a clean sweep of the Cabela's National Team Championship on Bays de Noc.  The team walked away with 2 new Ranger 621 Boats and nearly $50,000 in cash!

The odds of a "Repeat" in the Professional Walleye World is next to impossible, considering the talents of the many other competitors!  Despite having the odds stacked against him, Korey went out and again came in with two solid baskets to hold a 2 pound lead over Ryan Dempsey going into the final day of the FLW Bays de Noc.  A 2 pound lead on the Great Lakes doesn't mean much, as there are 10+ pound Walleyes to be caught by anyone on any given day! 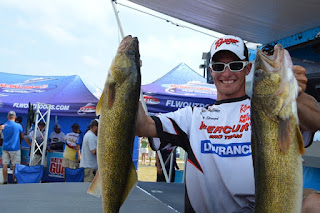 With changing weather conditions and a long run to get to his fish, Korey stuck to his game plan and was able to once again bring a solid limit to the scales and take the second consecutive victory!  Korey took the first place check worth $50,000 and also stated that he will be fishing the FLW Walleye Tour next season.  For more information on this event, check out  http://www.bearsolis.com/ and http://walleye.outdoorsfirst.com/ 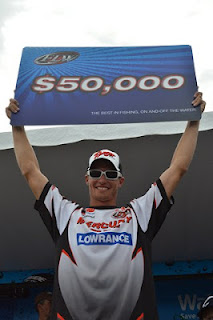