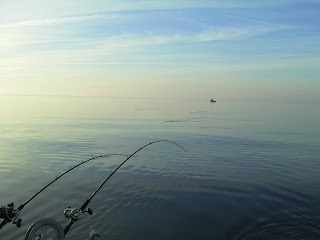 Hit the big pond Friday evening, June 17 in search of some Salmon!  Lake Michigan was flat calm, the sun was shining, and we actually had to stand in the shade it was so warm out there!  Fishing started off slow for us, not getting a bump until 7:30. 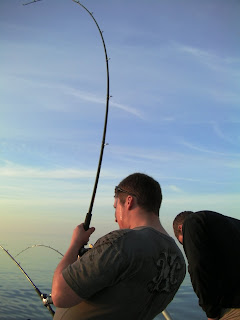 The first two fish were able to shake off within seconds of the strike.  The third bite was the charm, as a rigger set at 130 over 230 feet of water with a magnum flasher and aqua fly tripped.  The fish then ran 400' of line out before Grant could finally slow it down!  45 minutes later, we had a 22 pound King Salmon in the net!  This fish was all Grant could handle, as his arms were shot by the end of the battle!

Our next hit came at around 8:15 on a dipsey diver and green flasher fly combo set at 190'.  As Kyle was battling this fish, a yellow bird with 3 colors of leadcore and a j-plug got hammered!  I quickly grabbed the rod and it was double trouble!  We crossed lines a few times with our fish, but were able to land both fish within seconds of each other!  Both fish were in the 15-17 pound class! 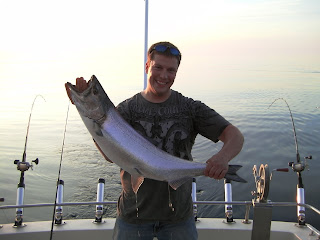 By the time we had everything straightened out after the double, it was glow time!  We brought the baits up and glowed them up for the sunset bite.  Soon after glowing up one of the dipsies, we had another fish on!  This fish also had some shoulders to it, since it ran about 100' of line off the spool before it could be turned around!  There is nothing quite like the sound of a screaming drag while watching a Lake Michigan Sunset! 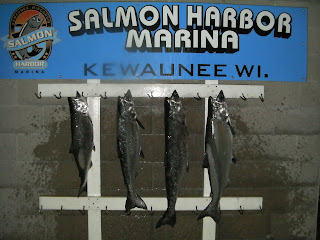 This fish eventually tired and made it to the net, another whopper topping the scales at 20 pounds!  This was the end of the action for the night for us, but we were all able to land a fish and enjoy a beautiful night on the lake!

Cameron Lewis and Tim Euting weighed a two day total of 10 Walleyes for 23.98 pounds, which was enough to win Walleye Weekend!  300 teams competed for the top spot in less than favorable conditions over the weekend.  Northeast winds up to 25 mph pounding down the lake made Fond du lac into a rough and muddy mess!  Despite large waves and strong winds, the 300 boats went out on time each day and dispersed throughout the Winnebago System in search of five big Walleyes.

Heavy northeast winds also made fishing difficult, many boats chose to troll the rock shorelines and reefs on Lake Winnebago, while others chose to anchor and watch bobbers on the reef tops.  Whether trolling or anchoring, the winds made fishing small spot on the spots nearly impossible! 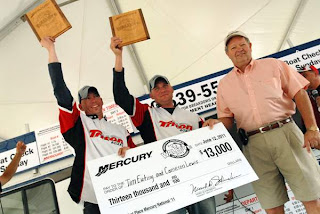 Despite brutal conditions, 58 teams were able to weigh limits both days.  The majority of these teams with limits were fishing the west shore reefs of Lake Winnebago, which seems to be the go to pattern right now for numbers of fish.

The winners were reportedly fishing the Northwest part of the lake casting jigs and crankbaits on the reef tops, while second place was taken down in the Abrahams Reef area anchoring and drifting jigs over the reefs.

This weekend will also be a busy one on the lake, as Otter Street Fishing Club will be holding their annual 2 day Walleye Tournament out of Menominee Park in Oshkosh.

I hope to get out a night this week to get a first hand report on what is happening out on the lake, and hopefully find a few nice fish!  To everyone fishing this weekend, be safe, have fun, and good luck!
No comments:
Email ThisBlogThis!Share to TwitterShare to FacebookShare to Pinterest

Walleye Action Heating up with the Weather!

The past week has finally brought some above normal temperatures to our area, which has helped Lake Winnebago warm from the upper fifties to near seventy degrees today!  Along with the water temps warming, so has the fishing!  Walleyes can be caught from Fond du lac to Menasha at the present time, and everywhere in between!

The Walleyes are in several key locations at the present time including: the rocky reefs along the west shore, rocky shorelines on both sides of the lake, in and around emerging weeds, and there are a few reports of fish being taken from the shallow mud flats in the middle of the lake.

Trolling the mud will only get better in the coming weeks as water temps become favorable for the Walleyes.  I expect the mud bite to be tougher than normal years, since there is an abundance of feed in the system and the fish can feed when it is convenient for them.

The second of four MWS events will be held this Sunday out of Menominee Park in Oshkosh and should have some impressive limits of Walleyes brought to the scales!  The weigh in will be at Menominee Park beginning at 2:30, so if you want to check out the action stop on down!

Unfortunately for Steve, I will not be able to fish due to other commitments, but he will be fishing with an "observer" to allow us to remain a team for the next two events!  The major disadvantage to Steve will be the fact that he can only fish with 3 lines as well as only keep 5 Walleyes vs. the 10 we could keep if we fished together!

Either way, I am pumped for the next MWS event which will be out of Metro Boat Launch in Green Bay on July 31.
No comments:
Email ThisBlogThis!Share to TwitterShare to FacebookShare to Pinterest
Newer Posts Older Posts Home
Subscribe to: Posts (Atom)