Finally made it back out on the water Tuesday afternoon after a busy week at work as well as my wife's graduation from the Dental Hygiene program.

We launched the boat at Rainbow Park at around 4:30 and headed into Lake Butte des Morts in search of some Walleye action.  There were a few boats pulling flies at 41 bridge as well as about 15 boats anchored all over Sunset Point.  Time was limited, so we decided to join the crowd and try to put some fish in the livewell. 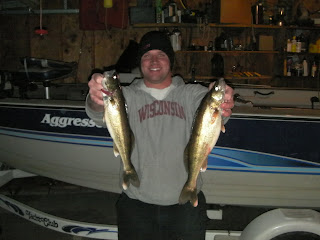 Things started slow for us, but there were a few fish being caught around us which kept us motivated.  After a long two hours of fishing we had caught around 10 Perch and 3 Walleyes.  Derek and I decided to make another move and that is when the action heated up!  In the last 90 minutes we caught 9 Walleyes and a few nice Perch!

The fish were just hammering slip bobbers tipped with half a crawler in 5-6 feet of water!  It certainly seemed like the fish began moving shallower as the sun slowly crept towards the horizon, because the boats close to shore hardly caught anything until just before sunset.  Maybe this is why they call is Sunset Point!  There were even people catching them off their docks every minute or two!

If you are looking for a place to catch a few fish and you don't mind having some company around you, then Sunset Point is the place to be right now!  All of the fish were between 13-18", with the exception of 1 that went about 7"! 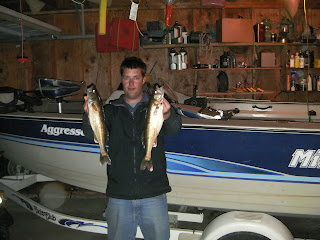 I will be up north at the cabin over the weekend working on my deer blind, drinking skills, and possibly doing a little fishing as well!  Thanks for reading and I hope to get out on Lake Winnebago early next week to check on the reef bite that should also be on fire over the weekend!
Email ThisBlogThis!Share to TwitterShare to FacebookShare to Pinterest

NICE fish, I will be working on my drinking skills this weekend as well