Early ice can offer some of the best action of the entire year for several strains of Great Lakes Trout.  At this time of the year the Coho Salmon are finishing their spawning migration up the tributaries of Lake Michigan and being followed by Brown Trout.  Some Steelhead strains also head up the tribs to spawn around ice up. 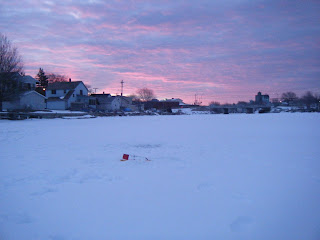 This can also be a very hazardous time to be on thin ice, since the many harbors and rivers along the lake take longer to freeze than most inland lakes.  Caution should be taken, spudding ahead of yourself with a chisel is always a good idea as well as bringing a friend.

Harbors offer a safe environment for the Trout as well as an abundance of food, which in many cases causes the fish to hang around the harbors for much of the cold water season.  Harbor fishing techniques tend to vary from tributary fishing since the water in many harbors is very clear compared to the stained water of the many rivers along Lake Michigan.  Lighter line and finesse patterns outproduce the bulkier setups used in the rivers.

The tributaries may also offer food, but the primary reason most of these fish are in the tribs is to complete their spawning rituals.  Unlike Salmon, Trout can spawn more than once, running up the river to spawn, then returning back to the lake.  Spawning fish will move up into the river when triggered by water temps or increases in flow.   The fish will hold in deep pools waiting for the perfect spawning conditions before swimming onto the redd and spawning.  Knowing where these fish hold prior to and after spawning is the key to success. 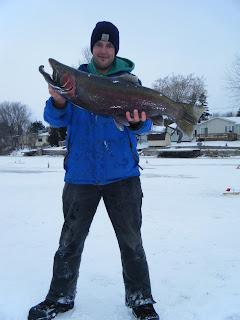 New advances in tip up technology like the Automatic Fisherman and Hook Set Tip up have increased the catch percentages of these critters.  Trout are very sensitive to line pressure and will drop a bait immediately if they feel the slightest tension.  In many cases this results in a flag but no fish on conventional tip ups.  The Automatic Fisherman uses an actual ice fishing pole with a bobber between the first two eyes of the rod that lifts when a fish grabs the bait.  Once the line tightens, the jig rod is released from its loaded position and the hook is set.  It is then up to the drag to hold the fish until you get to the setup.  Once there you get to grab the rod and fight the fish on a pole rather than by hand.  This is really important with Trout, since they like to take long sudden runs.  I had several instances with conventional tip ups where a fish would run on me and the line would break when the excess line would catch on the ice.  The Hook Set Tip up also sets the hook for you, except it sets the hook on impact.  As soon as the fish applies tension to the bait, a spring unloads setting the hook.  This proves to be very effective, however you still have to land the fish by hand.


Trout seem to want a certain bait one day, and a completely different one the next.  For this reason it is good to have a good variety of baits with you on every trip.  Any type of spawn or skein that is fresh is a top choice, especially Brown or Steelhead skein or eggs.  Trout just love to gobble up eggs, which makes it a very effective bait.  Minnows are also effective at times and tend to catch larger Trout.  I have seen several 20+ pound Browns take small Golden Shiners.  Wax worms or Spikes can also catch fish on certain days.  There are many other techniques that can put Trout on the ice, including jigging spawn, jigging tubes, shrimp, jigging Gulp, and even Walleye techniques like Swedish Pimples or Jigging Rapalas. 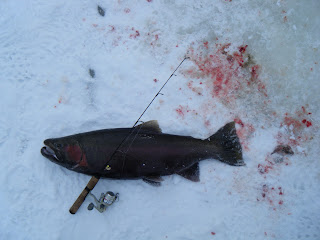