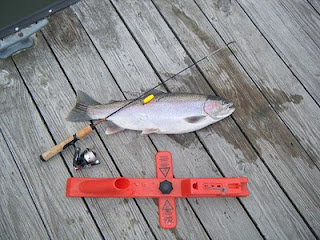 Well, the ice here in northeast Wisconsin is finally safe to venture out on in many of the harbors and rivers along Lake Michigan.  On Thursday I took the day off from work to try out the Automatic Fisherman I had just purchased for Trout Fishing through the ice.

I headed to Manitowoc Harbor only to find 1/2" of ice covering the harbor with a few pockets of open water.  An hour drive in the early morning with high hopes of catching some Trout through the ice had me searching for ways to fish.  I was not going home just yet.  Looking at the situation I soon realized that I could break through some of the thin ice and wade out 15' to the end of the docks and fish from there.  After a few minutes of pondering the situation, I was on the docks with all of my equipment and setting up my Automatic Fisherman from the docks!

I began with the first one set about 4' down in 8 ft of water and used a spawn sac.  On the next Auto I set the spawn a foot off the bottom in 9 ft of water.  With my last available line I decided to jig with wax worms since that can be very productive at times.  Within 20 minutes I heard the loud thud of the Auto tripping and could see my rod pumping.  I ran over and landed a beautiful hen Rainbow around 6lbs.  Fighting the fish through 1/2" of ice and clear water was really neat, since I could see every move it made.

As soon as I landed her I reset the Auto and checked to see if the hen had any eggs.  I was pleasantly surprised when I found that she was full of skein!  This is in my opinion the best trout bait around!  I quickly changed my old spawn with the fresh skein on the Autos.  As I was dropping the fresh skein down the hole I watched a Trout inhale the skein on the drop!  This fish was quite a bit larger than the one I had just landed!  By the time a set the hook the fish was off, but I knew at this point that the new skein was gonna work!

Another hour passed before another trip on the Auto set 4' below the ice.  This time the fish was larger and took some long runs, including two different runs around dock pilings.  I still can't believe I was able to land this one with 8lb test!  At one point the Rainbow was joined by another Rainbow which followed it as it thrashed below the thin ice.  The buck then attempted to jump out of the water, making a loud thud on the bottom of the ice!  If I only could have gotten video of this fish!  The fish finally tired around 10 minutes later and I was able to pull him through the hole.  What a battle that was, can't wait to do it all over again.  This however, was the last of the action for me that day.  I look forward to my next trip on the ice for some more Great Lakes Trout!  The Automatic Fisherman did not disappoint on their first test for Trout! 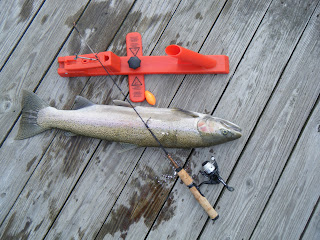