As area lakes begin to skim over with ice and that first snowfall of the year blankets the ground, ice fishermen need to scratch that itch.  The itch to be on early ice can yield phenomenal results, but the reward doesn’t always outweigh the risk.

There isn’t a fish out there that is worth taking a cold plunge for, and especially not a fish that is worth your life.  During early ice, which I consider less than 5” of ice, fishing with a friend is highly recommended.  As the winter progresses and the ice thickens solo trips are appropriate, but during early ice they are a risky proposition.

If venturing out on early ice alone, I strongly suggest letting someone know exactly where you will be fishing and when you plan to come back.  Having your cell phone handy and in a waterproof case or bag is also suggested.  Ice picks are also highly recommended. 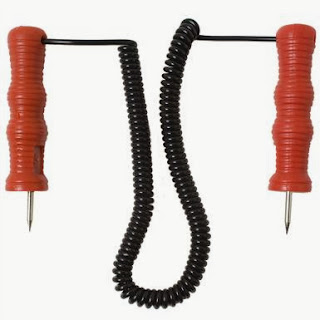 Being prepared for actually falling through is key to fishing on thin ice.  Ice picks should be worn around your neck for quick access in case you end up in the drink.  Having a long rope along with your gear is also a good idea, since a rope allows another person to retrieve the person that broke through from a safe distance.

Waders can also be worn on the ice to prevent an angler from getting wet while fishing in shallow water.  Waders can be dangerous at the same time, since they can fill up with water and actually weigh you down if you fall through in water deeper than the waders.  For this reason, I only suggest wearing waders if you know that the water depth where you are fishing is less than 4’.

Using a chisel to check the ice ahead of you as you are walking around on thin ice is also a good idea to prevent you from walking over thin spots.  Generally if you break through the ice with one hit of the chisel it is probably not going to hold you up for long!

There are times where you will also be able to determine spots that froze over late or are thinner due to current simply by the color of the ice.  Avoid ice that appears darker than the main ice, since it is usually thinner than the other ice. 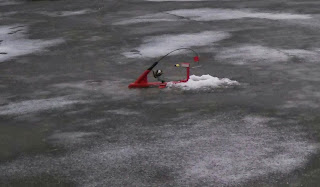 When fishing rivers during early ice, it is very important for an angler to understand where the main current flows through, since your thinnest ice will be where there is the most current.  Learning the currents should be done in the fall prior to ice up, to ensure your safety once the river freezes over.


The next time you get that itch to get your ice fishing gear out to capitalize on the early ice bite, remember that no fish is worth your life and think safety first!
Email ThisBlogThis!Share to TwitterShare to FacebookShare to Pinterest