Made it out on the ice once again, this time I headed down to Oshkosh with hopes of finding some schooled up Walleyes out from the river.  Sunday morning started out with brutal cold, as I had -7° as I made my way over Otter Street's bridge off Merritt Ave. at 6:30.  Ice conditions off Oshkosh were almost ideal, as there was hardly any snow or major shoves.  Many people took advantage of this, as there were many cars and minivans out on the lake. 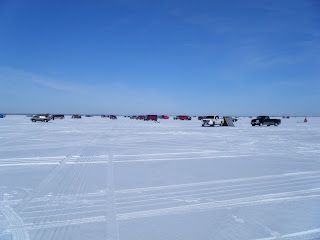 Nick and I began the day on the edge of the group to the north, and marked multiple fish near bottom, but couldn't get these fish to respond to anything.  After 45 minutes of building frustration, we finally decided to make a move and try to locate some more active fish.  We headed off on our own to an area where I had caught Walleyes in previous winters.  Same news here, as we could mark fish but couldn't catch them.  Our third move landed us on the edge of another group that had setup straight off the river mouth around 3 miles out.

The fish seemed to slowly turn on around 9:00, as I landed a decent Perch and a couple White Bass.  I still hadn't marked any good schools of Walleyes, so again we decided to make a move.  Thanks to a call from my friend Dale, we knew exactly where to go!  We cut in about 50 yards from Dale, and within 5 minutes I had 2 Walleyes and a nice Crappie on the ice!  I had another Walleye race up to my Jigging Rapala and bite, but I was a little late on my hook set.  We had another school off Walleye fill up the screen of my flasher, but they seemed to be on the move as none of them responded to my lure that time.  Minutes later a group of 5 guys on 4 wheelers cut 10 holes within 30 yards of us and spooked the fish out of the area. 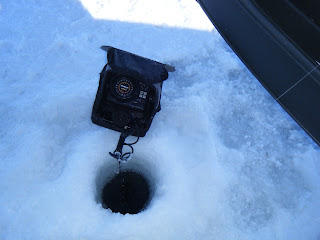 Nick and I made several small moves in the area hoping to relocate the school of Walleyes, but after 5 moves without any luck we decided to head back to where we had caught the White Bass.  Within minutes of stopping at this spot, we had 5 White Bass and a Crappie on the ice!  These fish all took a silver #3 Swedish Pimple naked.  Unfortunately our time ran out, and we had to call it a day in the midst of the best action we had seen all day, seems to happen to me alot lately! 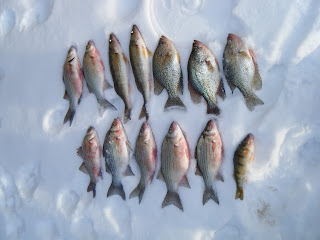 Overall we had an enjoyable day on the ice, despite the less than favorable cold to start the day!  Most guys that we talked to along the way reported similar results.  There were lots of people moving throughout the day, which also told the story on how tough the bite was.  Expect fishing to improve as the Walleyes continue to form schools and approach the river.  We have also noticed an explosion of Crappies on the Winnebago System, both on Lake Winnebago and Lake Poygan this winter, there have been a good amount Crappies caught!
Email ThisBlogThis!Share to TwitterShare to FacebookShare to Pinterest