As the wild spring of 2012 continues, Walleyes throughout the Bay of Green Bay continue to be found in all stages of the spawn in any given location. 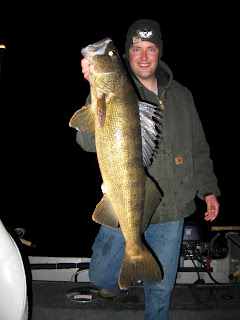 The southern bay fish seem to be 95% done spawning while the fish north of Oconto and Sturgeon Bay are still being caught with firm bellies as well as completely spawned out.  The ratio up to the north is probably closer to 60% done to 40% still with eggs in them.

The fishing has been nothing short of phenomenal lately when mother nature has allowed anglers to get on the water.  Fish are already being caught on nightcrawler harnesses during the day, while the night bite along rocky shorelines continues to yield good numbers of quality fish along both shorelines of the bay.

This past week I had the opportunity to get out with a good friend, Josh Berken with Fishin' Addiction Guide Service for a couple hours of trolling up in Door County.  We launched the boat at 7:00 and were setup by 7:30 as the sun hit the horizon and quickly disappeared.

Within 15 minutes our furthest inside board flew back and a spunky Brown Trout broke the surface.  The Brown jumped out of the water 5 or 6 times before we were able to clear lines and put the fish in the net!  Not a bad way to start an evening off, as we took a couple pics and released the healthy 5 pound Brown Trout. 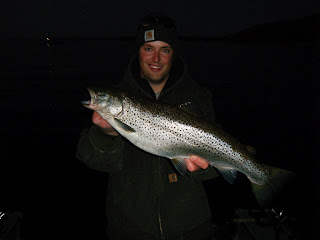 As we continued down the shoreline, this time the furthest outside board began falling behind the others.  Josh grabbed a hold of the rod and began fighting the fish as I cleared the inside rods and grabbed the net.  This time I happily guided a healthy post spawn Walleye into the net.  This fish went 26.5" and was quickly released before we could even take a picture!

As we reset lines and continued our pass, we joked about now not being able to catch another fish.  Luckily for us the fish continued biting for the next 2 hours as we continued fishing well into the darkness. 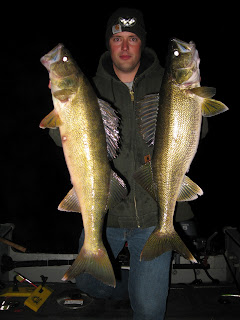 At one point we had 2 boards go back at the same time!  Josh ended up setting his pole with a fish on it back in the rod holder while he netted my fish, which turned out to be a beautiful 31.5" spawned out female that had just finished her duty and was already on the hunt for food.  I was against the clock as I was a bit shaky while getting the fish out of the net, getting her into the livewell, and then removing the lure from the net all before Josh got his fish to the boat. 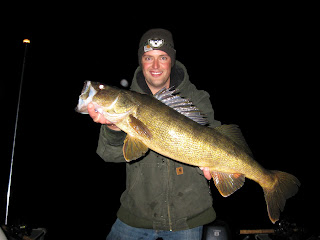 I was able to do this in the nick of time and land his fish without issues.  His fish looked tiny compared to the one I had landed, but measured out to be 25.5", which is a nice Walleye anywhere in the country!  We remembered to take pictures this time around, which turned out great! 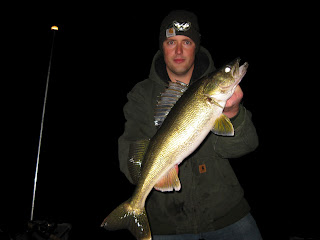 Even though the fish were still hitting at 11:00, we decided to wrap it up for the night since I had to be up at 5:30 for work and we still had a long trip home.  When the fishing is this good, a guy should really take some vacation and enjoy it!  I will try to remember this for next year!
Email ThisBlogThis!Share to TwitterShare to FacebookShare to Pinterest

Whoah! What a catch. I can't wait to grab my pedal boat. What's the biggest southern bay fish you catched?